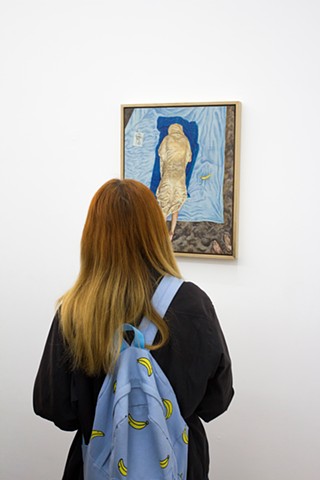 The Quiet Corner
< previous next >

Ah! The quiet corner! A place meant for relaxation and reflection; most artists need one. An isolated location, where one can sit alone, recollect and engage in contemplation. A point where one can be lost in thoughts, schemes or plots, or just consider one`s actions. Is it a shrine, a fortress, a bunker or maybe a padded cell? It could be that little gadget everybody carries with them, that window to another reality which one gets so absorbed and lost into, that object one always buttons and checks upon. Or perhaps it`s just a mindset one can slip into, remaining present physically, but mentally distant in one’s daydreams and fantasies. Perhaps. But most likely it`s the artist`s studio.

”Lateral ArtSpace presents a painting exhibition, that is more than an exhibition with artists having something in common, it is a reunion of a generation. Most artists participating in this exhibition were schoolmates at the Arts University in Cluj and are still friends, visit each other, discuss their art, but they do not form a group and do not share a common belief or a similar aesthetic. Yet there is a common ground that links the artworks in the show, and I do not speak here of the too general “figurative”, but of certain relationship with the meaning of painting and its language, with obvious connections to classical art. Dragos Badita (n. 1987) manages to convey to the viewer that what he paints is not actually what is seen, but rather what is under the skin of things or people. Simple scenes from the immediate reality of the artist or portraits of close people are translated by means of painting in a surreal dimension in which emotions, feelings or states of contemplation and meditation are dominating the image. His paintings remind us of Symbolist art or even of the Pre-Rafaelites. It is obvious that for the six artists in this exhibition Art history is a fundamental landmark of the way they shape their own artistic language, but more important is what separates them, namely the different worlds that each of them are creating with this language.” – Serban Savu